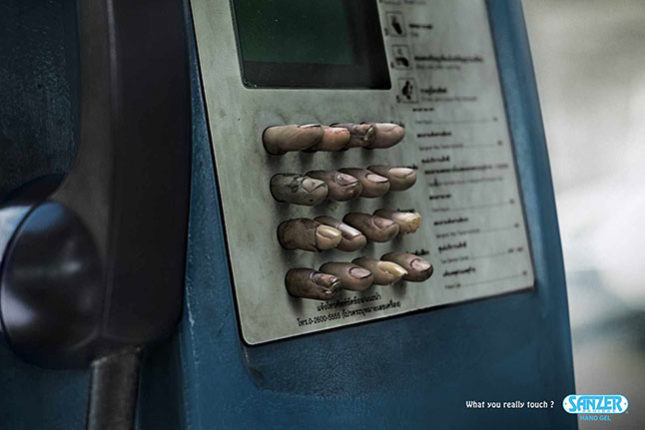 Semiotics is the study of meaning-making in verbal and non-verbal language and proposes that messages must adhere to culturally shared sign systems in order to be received successfully. In media studies, semiotics allows us to unpack the meaning of any instance of the media, or ‘text’, by breaking it into its constituent parts and analysing its production, context, and distribution (O’Shaughnessy & Stadler, 2012, p. 131-160). In this essay I will employ semiotics to deconstruct a 2010 print advertisement which promoted the use of hand sanitiser as a means of protection against bacteria found on public surfaces. I will analyse signs within the text while explaining the semiotic concepts of denotation, connotation, the signifier and signified parts of signs, sign classes, convention, intertextuality and anchorage.

The selected text is a print advertisement from a series of three published in August 2010 by Bangkok-based advertising agency Chuo Senko to promote Sanzer Hand Gel. The language of the text is English but it was solely distributed in Asia (Chuo Senko, 2014). In late 2009 and 2010 the World Health Organisation issued multiple global alerts for Avian Influenza outbreaks throughout Asia (2014). The text’s release would have drawn on the established public fear of contracting disease.

Semiotics suggests that the text’s promotional message is delivered through signs, and that denotation is the most obvious or widely accepted level on which these signs communicate (O’Shaughnessy & Stadler, 2012, p. 136). Denotation can be expressed by describing a sign as literally as possible, and on a denotative level the text depicts a payphone where the keypad’s digits have been exchanged with digits of a different variety; dirty fingertips. Jutting out of the phone, they are detailed enough for the viewer to distinguish a gruesome array of uncleanliness. The fingers are not uniform and therefore must belong to many people. Thumbs and pinkies are absent, leading us to infer that these are index fingers – the finger one naturally uses when pushing buttons on a keypad. There is a mix of male and female fingers; we can assume this because one fingernail on the bottom row is painted with nail polish. At least one finger has sustained an injury and is bandaged. The manufacturer’s logo appears bottom-right alongside the question “What you really touch?” Together these signs construct a setting that plays on both fantasy and reality.

Connotation is the second level on which signs operate and encompasses the emotions, values and associations communicated to the viewer. Connotations are both ‘individual’, where the viewer’s personal experiences shape the way they interpret a text, and ‘cultural’, where the meaning of a text is shared collectively. Individual connotations are often omitted from semiotic analysis because they are as many and varied as the text’s audience (O’Shaughnessy & Stadler, 2012, p.136). While cultural connotations vary from audience to audience, general connotations of payphones are that they are public devices, accessible to all, touched by all, and used by those without access to a mobile phone or landline, for instance low socio-economic individuals, travellers, and people in emergency situations – all of whom could be considered high-risk individuals for carrying bacteria. Cultural connotations of fingers are multitude, but in this setting they connote poor hygiene (represented by the dirt), illness (represented by the bandage) and danger (represented by the orphaned fingers). These connotations are not gender-, age- or race-specific and are applicable to all members of the public. The connotations draw on fear to deliver an immediate and threatening emotional impact to the largest possible audience.

Signs can be described in further detail when split into their ‘signifier’ and ‘signified’ parts. The signifier of a sign is the visible, audible or material aspect that carries the meaning, while the signified is the object or idea being referred to (O’Shaughnessy & Stadler, 2012, p.132). In the selected text, soiled fingers are signifiers because they visually carry the meaning, while poor hygiene, illness and danger are the signified concepts. Similarly, the payphone is a signifier because it carries the (signified) idea of often-touched surfaces in public spaces. Highlighting the ‘signifier’ and the ‘signified’ helps us to explain how individual signs communicate their meaning.

Furthermore, signs can be classified as ‘iconic’, ‘symbolic’, or ‘indexical’ based on how the signifier and signified work together (O’Shaughnessy & Stadler, 2012, p.138-139). In iconic signs, the signifier and signified both imitate what they represent. In this case, the complete image is iconic because it is a real-world representation of a payphone in a public space. If the scene were illustrated or communicated audibly it would still be iconic as imitation would still occur. Indexical signs reference an idea, playing on the relationship between what the sign stands for and the sense behind it. Despite the payphone’s keypad being replaced by fingers, the arrangement of the 4×4 grid is representative of numeric keys, communicating the idea of a keypad and thus indexical. The relationship between the keypad and fingers is not arbitrary; the viewer recognises that fingers push keys on a payphone. If the keypad had instead been represented with toes, the keypad would not be as recognisable and the meaning confused. Symbolic signs stand for, but have no resemblance to, what they represent. The Thai characters beneath the fingers are symbolic signs because as signifiers they are arbitrary to the Thai language they signify. Sign classes explain the varying ways in which signs can refer to their objects.

Conventions are methods of organising signs to communicate widely understood meaning (O’Shaughnessy & Stadler, 2012, p.134). Camera angle, camera lens and composition are photographic conventions used in the selected text to heighten the viewer’s sense of danger. The close-up camera angle places the viewer at eye level with the payphone’s keypad, an unnatural perspective since most adults view the keypad from above when using a payphone. Aside from bringing the audience closer to the subject, the close-up shows us the importance of the keypad. The chosen camera lens further enhances the dirt on each finger, bringing the threat uncomfortably near to the viewer. The composition tilts the payphone slightly away from the viewer so that the fingers are not pointing directly at her. This angle includes the viewer while not accusing her directly with the pointing fingers. Each finger extends itself potentially to the next person approaching the payphone, suggesting that threat is near, but the danger can be avoided if the viewer uses the promoted product to protect herself. Distracting background elements have been blurred, intensifying the effect of the camera angle, lens and composition. The scene has been carefully constructed using established conventions to capture the viewer’s imagination and to incite fear or disgust.

Intertextuality is when one text borrows and refers to other texts, or when a text can be interpreted in relation to other texts (O’Shaughnessy & Stadler, 2012, p.145). This scene featuring gruesome, disconnected fingers can be compared to promotional posters for the first and second films of the SAW horror-film franchise. Horror-film posters traditionally show an image of a villain or a victim’s face, whereas the SAW (see Figure 2) and SAW II (see Figure 3) posters show severed limbs, demonstrating that a gory crime has been committed upon an unidentified victim. Comparatively, the selected text demonstrates a ‘crime’ of poor hygiene where the victims are anonymous and legion. Dark, low-level lighting creates a creepy, horror-film atmosphere, urging the viewer to associate the image with evil or the unknown, heightening the mood of vulnerability. Unlike traditional horror-film posters, there is an absence of blood implying that the danger is not life-threatening. The dirty fingers on the keypad are the villains to whom the viewer could succumb.

Anchorage occurs in the form of the bottom-right caption which is employed to articulate the desired meaning of the text (O’Shaughnessy & Stadler, 2012, p.146). The question “What you really touch?” asks the viewer to assess dirty surfaces with which she comes into contact and determine their threat. Basic English (instead of grammatically correct English which would read has been used to address an audience of principally non-native English speakers, presenting the caption as simply as possible to ensure the widest comprehension possible. Anchorage acts to limit ‘polysemy’ which occurs when signs can be interpreted in multiple ways (p.102). The probability of polysemy occurring in the selected text is high if the confronting image were not accompanied by a caption; the image could be interpreted as an advertising campaign for a horror-film production or a campaign to support people living in non-sanitary conditions. Anchorage is also utilised here to encourage the viewer to further expand on the text’s ‘implied narrative’: what happened before the presented moment in time at the payphone, and what will happen next? Anchorage reduces ambiguity in a text by navigating the viewer to the crux of an intended message.

In conclusion, I have demonstrated that the selected text contains multiple signs that have been carefully selected to promote the idea that unhygienic public surfaces pose a threat to the viewer and that this threat can be neutralised by using the Sanzer Hand Gel product. The concepts of denotation and connotation show that signs work on two levels while the co-dependent elements of signifiers and signified messages and sign classes help to isolate individual signs and their meaning while explaining why and how a sign works. I would additionally argue that convention, intertextuality and anchorage are semiotic devices which the text’s creators employ to thrust forward their message by drawing on the emotions and values of their audience.