“Uber by Name, Uber by Nature”

On 11 June 2014, an estimated 12,000 London taxi drivers went on strike to protest rival car-hailing services not operating within the same regulations as the famous ‘Black Cabs’. On this day, Uber, the largest of these rival services, ran its “Uber by Name, Uber by Nature” static advert in London media. Through critical analysis it is evident that the components of the advert were carefully crafted and further bolstered by the critical timing of its publication.

The advert features a man and woman in the foreground, with an out-of-focus man in the background. We assume the pair are romantic by the way she holds his arm and the adoring way he looks at her. The woman gazes into the distance, giving the impression that they are forward moving and progressive. Both are classically dressed: the woman has voluminous, glossy hair and the man is wearing a suit jacket and an elegant scarf. We sense that these are two people who enjoy quality. The sombre yet stylish black and white photography has a fashion shoot feel.

Despite being for a car-hailing service, a car is not visible. An uncropped version of the photograph was a staple in Uber’s marketing assets at the time, and in this version the couple appear more glamorous and the man in the background is clearly a chauffeur, opening the door of a vehicle. The photo may have been cropped tightly to target a more general audience where chauffeur services are not standard, and to not offend people sympathising with the taxi drivers with demonstrations of wealth. 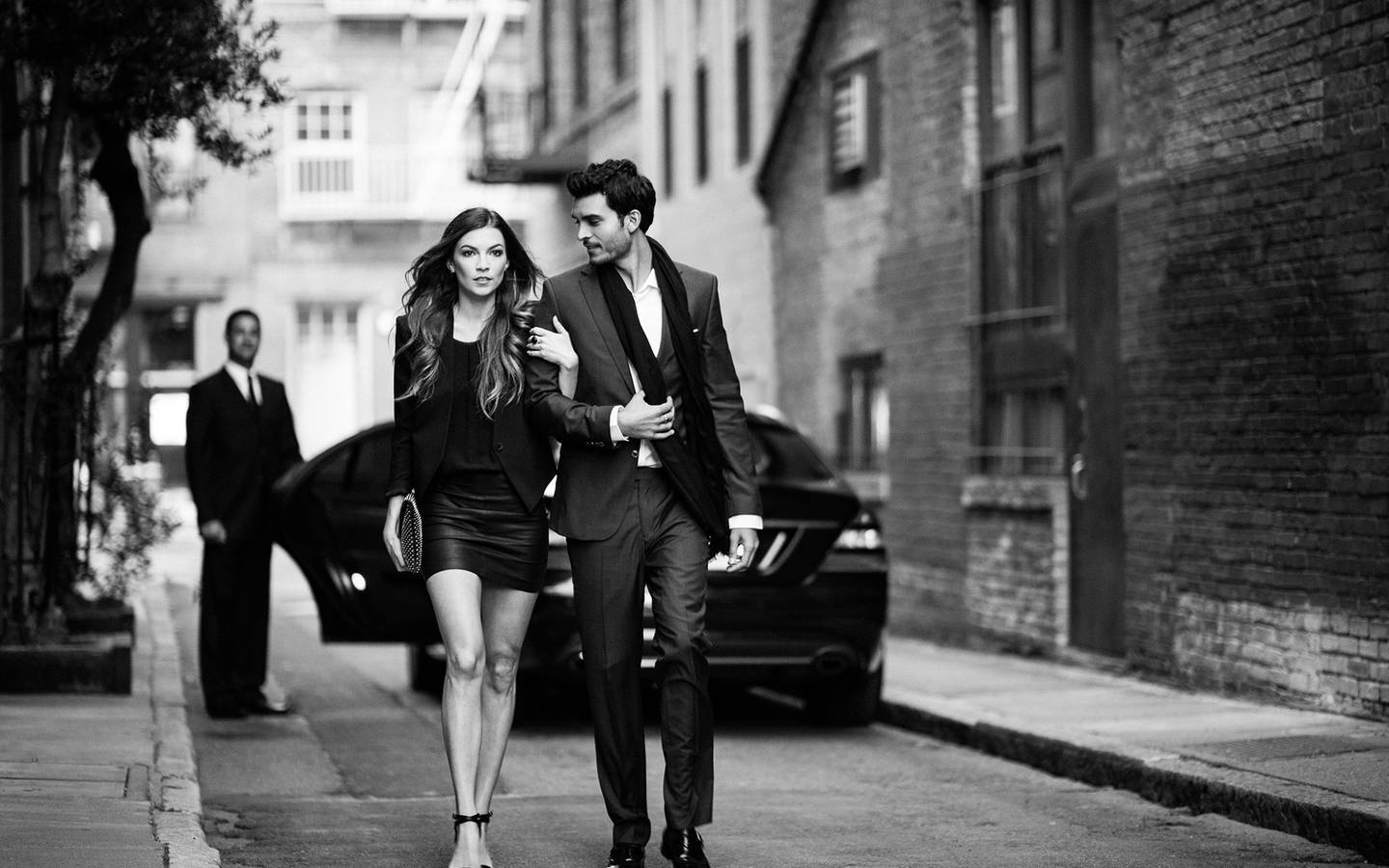 The landscape advert is horizontally cut in half, its format reinforced by a thin frame in Uber’s corporate blue colour that both encompasses the copy and provides the only colour in the advert. Intersecting the layout is a vertically centered composition: the couple are in the middle of the frame and the text is center-justified. This technique draws the reader’s eye to the Uber logo, placed slightly above the halfway line.

The image dominates, but does not convey the real meaning of the advert. The copy leads with mention of Uber’s smartphone app:

“Uber by name, Uber by nature. With a state of the art app, a range of cars from the luxurious to the more practical and door-to-door pick ups at an affordable price, we’re the car service that’s keeping London moving, proving that choice is a beautiful thing.”

Uber is targeting the technically savvy: we are not directed to a website and it is assumed we know to download the app to use the service. The promotional code ‘#movingon’ is also a hashtag, connecting the advert to a social media campaign. Utilizing double entendre, ‘#movingon’ suggests getting people to their destination as well as London taxi drivers “moving on” with their grievances without directly mentioning the protests. Taking no responsibility for the strikes, the copy claims that Uber provides us with choice, putting the power in consumer’s hands via a smartphone app while simultaneously positioning themselves as an essential public service during the protests. The inclusion of the wording “choice is a beautiful thing” links the text again with the image, accentuating the grace of the photo’s subjects.

The image source for the advert is: www.marketingmagazine.co.uk