Ideology in the Broadchurch Television Series 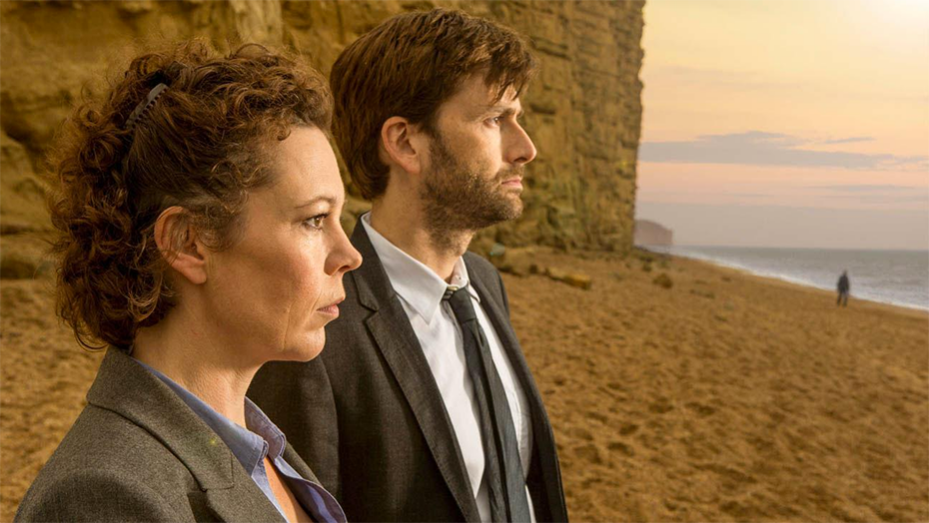 Broadchurch (Season One, 2013) is a British detective drama that explores the social structures of a beachside community impacted by the murder of 11 year old Danny Latimer. Through the investigative work of Detective Sergeant Ellie Miller and Detective Inspector Alec Hardy, viewers are encouraged to solve the murder by considering all townspeople as suspects. In this essay, I discuss what ideology is and discuss theories about why society’s elites are concerned with control of the media, the transmission of ideology in popular culture, and ideological pressures in television production. Thereafter, I discuss these ideological factors in respect to setting, gender, race, and age to demonstrate that the Broadchurch series (season one) reproduces current British ideology to cater to British audiences, opting to mirror dominant cultural norms instead of challenge them.

The Dictionary of the Social Sciences (2016) defines ideology as “a cohesive set of beliefs, ideas, and symbols through which persons interpret the world and their place within it.” Langman (2015) explains that whilst a plentitude of ideologies can exist and conflict within a social system, it is the dominant ideology that sets the cultural values, attitudes and beliefs for the population to follow. Consequently, dominant ideology must justify why society is governed the way it is, as well as provide convincing arguments for why people live the way they do (p. 428-430). Socialist philosopher Karl Marx (1818-1883) argued that ideology is a social construct, and that the value system it promotes only serves the elites. Hence, it is in the elites’ interests to control the substance of ideologies as well as how ideologies are circulated (Langman, 2015, p. 428-430).

Marxist theorists believe that society’s elites control the media as a way to distribute their self-serving ideologies and maintain hegemony. Marx himself believed that we live inside an inescapable capitalist framework, where those who control the means of production, control ideology. Marxist intellectual Antonio Gramsci (1891-1937) further developed this concept, arguing that it is through civil society—institutions such as family, education, religion and the media—that the elites indoctrinate people with ideology. Gramsci further argued that to maintain hegemony, the elites must maneuver their ideological messages through civil society to serve their own needs, whilst remaining credible and favorable to the majority. Gramsci believed this system creates a false consciousness where individuals no longer question the elites’ ideologies because they are deeply ingrained and habitual (Travis, 2015). Marxist philosopher Louis Althusser (1918-1990) believed that ideological recruitment occurs through ‘interpellation’ or ‘hailing’, where we always assume the role of subject when spoken to because we are conditioned to do so from birth (Althusser, 1971). In his model, paying even casual attention to the media results in the absorption of its ideology. Ultimately, the elites’ utilization of the media to distribute ideology and maintain hegemony means that all media output is politicized, including popular culture.

When ideology is packaged as entertainment, its appeal is maximized and its effects far-reaching. O’Shaughnessy (1990) states that the reach of popular culture across age, gender and social strata makes it a critical site where ideologies are transmitted and formed. However, O’Shaughnessy argues that its effects are difficult to determine because if we are indoctrinated within society, it is difficult for us to objectively assess it (p. 91). Outlining two schools of thought, O’Shaughnessy suggests that popular culture can mirror our ideologies and is therefore capable of reflecting, expressing and challenging society’s values, or alternatively be leveraged for mind-control, as evident in war-time propaganda (p. 92-94). O’Shaughnessy believes that popular culture, and television in particular, has the dual purpose of “gratifying the people, yet contributing to their enslavement” (p. 90), hence its production should be analysed with scepticism.

To appeal to audiences and advertisers, television producers rely on well-known formats to reproduce existing ideologies. According to O’Shaughnessy, “ideology works by masking, displacing, and naturalising social problems and contradictions” (1990, p. 96) with some viewpoints hidden, ignored or given lesser weight. Subsequently, social differences are usually smoothed over, and therefore diversity and the issues facing minority groups are completely ignored (Meek, 2016). For O’Shaughnessy, naturalisation occurs when television productions are portrayed as authentic representations of society through production techniques such as camera work and editing. While seemingly realistic but socially watered-down television productions are entertaining, audiences are purposely not prompted to question their current social conditions, and therefore the elites ideologies go unchallenged.

The Broadchurch television series illustrates several ideological positions that appeal to the British establishment. To begin with, the remote setting creates an ‘us’ and ‘them’ ideology, exemplifying the working class and encouraging viewers to identify social outsiders. A fictitious beachside community situated along England’s White Cliffs of Dover, Broadchurch is the only town for 20 miles. With only one road in and out, many of the 1500 residents have lived in the idyllic market town their whole lives, not venturing 50 miles from the city centre. Aside from the police, the population is working class and employed as plumbers, bar keepers, store clerks, or local journalists. Wealthy or poor individuals are never depicted, potentially assisting viewers to identify with characters and their lifestyles. However, the unrealistic smoothing of social conditions masks class as a theme, suggesting that the hardworking community is immune to problems stemming from social inequality or capitalism. Broadchurch is therefore a construct designed for maximum audience appeal: it is a quintessentially British holiday destination where viewers would feel socially included. Furthermore, Broadchurch’s isolation neatly confines the plot, as it is never considered that the murderer could have left town, keeping the threat of danger alive in the community. This creates the murder-mystery tension by ensuring that the townspeople point the finger at each other, singling out those who are different from themselves. Mistrusting outsiders in order to reveal the identity of the murderer is encouraged, masking the real-world effects that this non-inclusive behaviour creates.

Gender is another ideological element that is carefully masked, displaced and normalised. When Ellie Miller returns from holiday to discover that the promotion she was promised has been awarded to Alec Hardy, gender is established as a site of conflict. Disappointed, Ellie reacts with “a man? … What happened to this area needs a female Detective Inspector?” Her female boss replies that “he is very experienced”, masking why Ellie was not promoted and suggesting that Ellie is not qualified despite years of service. Without background information, viewers must assess why Ellie was overlooked for the promotion by comparing her to Alec throughout the season. Alec is traditionally masculine: emotionally detached, an analytical thinker and mentally strong, pushing on with the inquiry despite suffering from a severe heart condition. Creeber (2015) states that “the [male] TV detective is fundamentally a loner, anti social, married to his job and committed only to the pursuit of truth” (p.20), confirming this role as typical for the genre. In contrast, Ellie embodies the traditionally feminine and motherly traits of being emotional, nurturing and as a team player. When Alec scolds Ellie for not being professional, Ellie stands up for herself only to resume her motherly role, ensuring that Alec’s nutritional needs are met. In the final episode, the question of gender and competence is resolved through displacement: when a suspect reveals that she had previously been to jail because her husband had sexually molested their daughters, all without her knowing, Ellie accusingly asks, as both a detective and a mother, “how did you not know?” Then, when Danny’s murderer is revealed to be Ellie’s own husband, the victim’s mother rightly asks Ellie “how did you not know?” Ellie is personally devastated and professionally discredited, while the repeated idea of mothers “not knowing” naturalises the outcome by suggesting that women either turn a blind eye to protect their families or are unable to be objective, rendering them unfit for the traditionally male role of detective. This outcome justifies Ellie not getting the promotion in the first instance.

The overarching gender conflict between Ellie and Alec is so and dominant that it displaces race as an ideological element. O’Shaughnessy states that “gender conflict is often in the foregrounded … but class and racial conflict are given less space” (2016, p. 97) and this is evident in there being only two non-white characters in Broadchurch. The black ‘Scenes of Crime Officer’ Brian Young is presented as highly educated, technically competent, and responsible for detecting the key forensic evidence. He identifies Danny’s cause of death, stating that the boy did not commit suicide but was murdered. Alternatively, Dean is the 17 year old farmhand is involved with a minor and guilty of supplying her with drugs and alcohol. The two diametrically opposed roles act to mask the racism of Dean as a young black man being the first ‘criminal’ viewers are introduced to. In a town where anyone different is alien, the series glosses over any difficulties that these characters have living in an all-white community, instead utilizing the screen time for Ellie and Alec’s gender conflict.

Age and intimate relationships are additional themes, in particular the definition of what constitutes a legitimate or legal relationship. The illegal relationship between 15 year old Chloe and 17 year old Dean is naturalised when it is disclosed that Chloe’s parents also met at the same age, inferring it is common practice in the region. Beth and Mark Latimer’s relationship began when Beth was 15, and Mark is the only man that Beth has slept with. This fact acts to confirm the wholesomeness of a relationship that was later validated by marriage, displacing why a law designed to protect minors exists. The question of age and legality is repeated when reporters uncover a local news agent’s previous conviction for sex with a minor. When working as a teacher, the man had sex with a female student who was three months under the legal age of sixteen. He went to jail for the crime, marrying the woman upon his release. Again, it is the act of marriage that socially vindicates the crime, not the jail time. The couple had since separated, so we are never introduced to her character and only given the viewpoint of the older man. Not hearing the woman’s story masks the complications of the situation: how did the relationship with her teacher impact her education or relationship with her peers and family? Occurring three times, the situation is framed as acceptable despite being illegal, especially if validated by marriage. By depicting the status quo in rural communities, producers aligned themselves with audience sympathies instead of the establishment. To soften this position, the institution of marriage is provided as the solution to protect those involved, neutralising the conflict of interest.

There are strong ideological elements in the Broadchurch series that have been crafted to align with the ideologies of British audiences and the British establishment. Set in a picturesque but isolated community, social class is neutralized as a theme so that the viewers can identify with the characters, whilst avoiding difficult topics surrounding inequality and capitalism. Gender conflict is the principal ideological element, positioned to challenge workplace inequity, only to have a socially regressive outcome when women are portrayed as incapable of the succeeding in the traditionally male job of detective. The dominance of the gender conflict allows little space for the theme of race to be explored and possibly distracts viewers from the lack of diversity. Similarly, the theme of underage relationships could have challenged audiences by exploring the potentially negative impacts these can have on women but instead producers offer marriage as the solution to provide security and validate any wrongdoing. Audiences expect that a detective drama delivers justice, and this predetermined outcome is as generic as the show’s overall construction.